McEntee to tee off in Senior PGA Championship 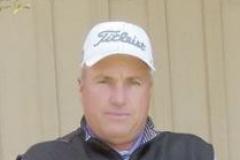 Shawn McEntee, who joined the Chardonnay Golf Club instructional staff in January 2012, is entered in the Senior PGA Championship. The event begins Thursday at Bellerive Country Club in St. Louis.

As a PGA golf professional, Shawn McEntee has a nice balance going on in his life.

He’s an instructor, helping out his students with their games. He also plays at a very high level.

It’s the best of both worlds for McEntee, a member of the PGA of America for the last 26 years.

“What I’m doing now is teaching and playing and enjoying that very much,” said McEntee, who joined the Chardonnay Golf Club instructional staff in January 2012. “We’re really trying to drive the teaching business here in Napa.”

McEntee, who makes his home in Petaluma, will take a break from the teaching side of golf to play in this week’s Senior PGA Championship, which begins Thursday at Bellerive Country Club in St. Louis. The 74th annual event will have a 156-player field, including defending champion Roger Chapman of England.

It’s a course that demands precision off the tee, in order to attack hole positions tucked away on challenging large, sloping greens.

Four-time Senior PGA champion Hale Irwin, who also owns three U.S. Open titles, is making his 16th consecutive appearance in the event. He finished runner-up in the 2004 U.S. Senior Open at Bellerive and tied for 66th in the 1992 PGA Championship.

The Golf Channel will have coverage of Thursday and Friday’s rounds. NBC Sports will televise the third and fourth rounds, on Saturday and Sunday.

The 2013 Senior PGA champion will have his name engraved on the Alfred S. Bourne Trophy.

McEntee played in his way into the field by placing 10th and qualifying last fall at a senior club pro championship. He’s a club pro, but he also has the experience of being on golf’s big stage, having played in the 1989 PGA Championship at Kemper Lakes Golf Club (Long Grove, Ill.), the 1991 PGA Championship at Crooked Stick (Carmel, Ind.), and the 1992 U.S. Open at Pebble Beach Golf Links.

He has played in the AT&T Pebble Beach National Pro-Am seven times. He has also been in the Bob Hope Classic, Los Angeles Open, San Diego Open and the Reno-Tahoe Open.

“I’ve had a chance to play a lot of competitive golf,” said McEntee, 54, who has played in over 30 PGA Tour events. “A lot of it’s through qualifying. I did try to get my (PGA Tour) card when I got out of college and wasn’t successful.”

McEntee was an NCAA Division II All-American at Cal State Stanislaus (Turlock) in 1979 and 1980. He graduated with a degree in business and was unsuccessful in two attempts at PGA Tour Qualifying School.

He made it to the finals of the Champions Tour Q School last year, but did not get his card.

“I keep telling myself, maybe I should have tried to stay out there longer when I turned pro and played the mini tours and given it a longer shot,” McEntee said.

“But my career has been great. Golf has been great to me. I’ve grown as a teacher. I’ve worked under some really good instructors that have made me a better instructor.”

A native of San Jose, McEntee is a Class A member of the PGA of America and worked with or under some of the top teachers in the game — Butch Harmon, Hank Haney and John Geerten Jr.

“When I was working (as a club pro), I had the opportunity also to play. I was actually qualifying and playing in big events on the west coast,” he said.

McEntee is among 40 PGA club professionals who are on the field this week. He played golf at Pioneer High School-San Jose and San Jose City College.

“I’m excited obviously about it. But I’ve played in a lot of big tournaments. I certainly know what to expect and know what’s going to be there, and I know that it’s going to take good play. I feel fairly relaxed going there. It’s just a matter of performing and playing well.

“I feel strong, I’m healthy. I’m not lacking distance as far as my golf swing goes. The putting feels good. I feel just as good now as I did 20 years ago. Managing yourself when you play is important.

“I really enjoy teaching. The excitement I get is helping people and see them perform. I still play good golf, I still feel healthy. I try to take care of myself. It’s going to be a fun week.”

Don Leone, the director of instruction at Coyote Creek, will caddie for McEntee.

McEntee will be grouped with Morris Hatalsky and Philip Golding for the first two rounds.

McEntee is also entered in the 46th PGA Professional National Championship, June 23-26 at Sunriver Resort in central Oregon. The event will bring a field of 312 to Sunriver, utilizing both Crosswater Club and Meadows Golf Course.

Receive the latest updates and news delivered straight to your inbox.